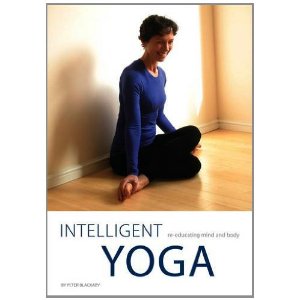 Peter Blackaby is a highly respected UK yoga teacher based here in Brighton – in fact his lovely Unit 4 studio is just 200 yards from where we live, and we use it regularly as the venue for our Brighton yoga workshops.

Coming from the Ashtanga tradition, it was quite a culture shock for me when I first went to his classes. His approach to yoga is very different. As time has gone on though, I have come to agree with some of his views (though not all !) and have adapted my own approach to Ashtanga as a result.

Nevertheless, he argues persuasively that: “Being led to confirm to a teacher’s personal viewpoint is inevitably disempowering for the student, who becomes dependent on the teacher. All power lies with the teacher as the possessor of knowledge. The is the opposite of what teaching is supposed to do which is surely to facilitate learning as effectively as possible ?” and: “Students need to be able to ask questions without feeling intimidated … surrendering to a guru … contrasts starkly with self trust and the idea of developing choice and reason … I can understand the relief that surrendering to a belief might bring, but it has a cost – the ability to question and to be open to new ideas”. Hear hear !

He also has a no-nonsense approach to posture work: “Perhaps the most difficult-to-convey aspect of teaching and learning yoga is the journey from structure to freedom. It is important to understand the reason for practicing any given posture – what is its point ?” And throughout the second half of the book he explains “what is the point” of commonly used postures in yoga practice and in some cases makes some trenchant criticism of how the posture are frequently taught (eg the Warrior pose).

Functional anatomy
Peter’s approach to yoga is grounded in his extensive anatomical knowledge. But he has a very different take on anatomy: “Each human being contains about 46 litres of saltwater in the pouches and tubes of the body and the spaces in between. This fluid is constantly pumped, sucked, squeezed and pushed into every conceivable corner of our being … How the muscles contain the fluid-filled structures of the body goes a long way to shaping a person’s posture … Knowing this, we can better imagine a different take on human anatomy: that of a soft, water-filled creature, a more fluid and less rigid structure; one that responds differently to gravity and requires the sustenance of pulsation.”

This distinctive functional approach leads to Peter’s emphasis on softness in yoga postures and the importance of the breath. After all: “The two biggest chambers in the body … (the thorax and abdomino-pelvic cavity) … are separated by the diaphragm, a tendino-muscular sheet that provides a floor to the thorax and a ceiling to the abdomen.” The use and health of the diaphragm is therefore paramount in the functioning of the entire body.

Warriors and postures
The second half of the book focuses on yoga postures with many helpful insights and observations. As someone who struggles with back bends, it was reassuring to read that: “It is important to recognise that people who have a great deal of extension in the lower back are born like that. It is something determined by the thickness of the interverterbal discs … No amount of practice will turn someone with genetically thinner discs into someone with thicker ones, so trying to emulate the deeper back bends if your body is not built that way will only end in tears.” And Peter’s emphasis on a correct foundation – the feet or the sitting bones usually – in yoga poses is also welcome.

Another reviewer has termed Peter’s approach as “floppy yoga”. Maybe this is a tad harsh, but there is no doubt that Peter is tending more and more towards a softer, more risk-averse approach in his teaching, even arguing against the common practice of the teacher physically adjusting students. I always remind myself that the vast majority of babies and very young children can do most of the yoga poses with which we all struggle. It surely cannot be a bad thing to aim to get our bodies back to the flexibility that they had initially, before we ruined them with bad habits like sitting in chairs. If that means sometimes pushing the boundaries and taking a few anatomical risks, surely that is no bad thing ?

I recommend Peter’s new book, Intelligent Yoga, to any serious student of yoga. It costs £25 and is available from Yogamatters or Amazon.