The first ever Brighton Yoga Festival yesterday (Sat 26 July) was a massive success!

Close to 2000 people are believed to have attended the all-day Festival event at St Georges Church in Brighton Kemptown. Around 500 people enjoyed the 30 free yoga classes and as many therapy sessions. Many more just soaked up the lovely atmosphere and the sun, ate the yummy food on offer from the Seven Bees Cafe or the Indian street food stall (Ahimsa), watched yoga performances, listened to talks and watched films about yoga, and browsed more than 20 yoga-related stalls.

The event also raised hundreds of pounds for two local Kemptown Charities – the Lifelines project for older people, and the Brighton Unemployed Centre and Families Project.

Around a dozen of us arrived at the Church at 5.30am to start reorganising & decorating the venue. We had a short yoga class together on the lawn outside and set to work. By 9am the first people began queueing to register for classes.

There were some great yoga classes and performances. And the Festival was formally opened by Caroline Lucas MP who also introduced our very own Davy Jones, who gave an amusing talk on Yoga and Politics.

Huge thanks to the 30 volunteers who helped the Organising Committee run the day. And thanks to our main sponsors – Gossypium (who provided the BYF T-shirts), Yoga People, Studio io, Jooga and About Balance – and the 20 other sponsors, without whose help the event could not have been free to everyone.

The general consensus is Forward to the 2nd Brighton Yoga Festival in 2015 ! 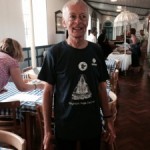